We did not cross any international borders today but we moved from Česky Krumlov to Prague within the Czech Republic. Two nights here will bring us to the end of our sightseeing destinations. Beyond that we have a couple of nights at convenient waypoints toward Paris and home.

Our accommodation, not really a traditional hotel, in Česky Krumlov offered breakfast in the room. Having consumed the last of our breakfast supplies in Budapest, that was our best option. The earliest they offered was 8:00 am so we were able to lie in a little longer than usual. The early night and slightly later rising seems to have improved my cold though I think what I got from the pharmacist in Stein yesterday helped.

After breakfast we walked around the old town. Majella wanted to see if she could find the craft store that Therese had recommended. We failed in that attempt but she did find another store with things worth buying and we found some market stalls setting up in the central square. They also had some things that caught her attention. The walk around town and by the river was enjoyable in any case. It was a fine morning and the autumn colours in the leaves that have begun to turn were bright.

At 10:00 am we checked out and walked, with a couple of wrong turns on account of there being no really direct path, to the car with our bags. By 10:30 am we were on the road heading for Prague with Majella driving again. We decided that it was best not to risk a coughing fit while driving. The route alternated between country roads and motorways with some long stretches of roadwork and a couple of deviations. Where we could see the countryside it appeared to be productive farmland, mostly harvested by this time. Forests, woodland, and cultivated trees along the way had a scattering of brilliantly coloured autumn leaves that added interest to the trip.

We arrived in Prague and found our hotel a little after 12:30 pm. We were able to park in front long enough to check in, bring up our luggage, and eat the bread and ham we had saved from breakfast but then had to move to a car park area a few hundred metres away. We went prepared with what we would need for an afternoon around Prague and were pleased to find the parking was near a tram stop serviced by the tram that ran to the Old Town.

As we walked to the store where the young woman at the car park had advised we could buy tram tickets I realised that I did not have the key to the hotel room. Searches of pockets and bag were fruitless so back to the car we went. I had dropped it while juggling the bits and pieces we needed to find and manage parking. Back across the road we bought passes for public transport, boarded a tram, and were soon walking in the Old Town area of Prague.

We had coffee at a restaurant in the square where Majella was sure that the acrobatic juggler we could see was the same one we had seen in Sydney in 2014. There were certainly some similarities in the performance and Sven from Sweden might well be travelling the world on his talents. 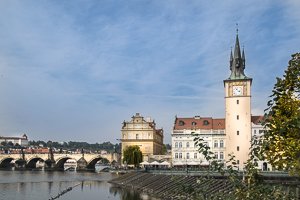 From the square we walked to the area around Charles Bridge and then across the bridge which was crowded with tourists and lined on both sides with buskers and mostly artists selling their wares. With entertainment on the bridge and views up and down the river it took some time to cross. On the other side we wandered up the street enjoying the variety of stores. Ice cream seemed appropriate for a warm day but we were not sure we could handle the large cones being sold in the first store we saw. Instead we settled for small cones from Amorino where the staff use spatulas to construct a flower on the cone from one or more flavours.

At St Nicholas church we made do with a quick look at the entrance area, declining to pay for admission. We walked up the hill and enjoyed the panoramic view over the city but did not take the castle tour. I don’t think we have been on the traditional ABC (another b…. church/cathedral/castle) tour but we do seem to be churched and castled out for now.

On the way back to the bridge we stopped at a tourist information point. While Majella was looking at brochures I noticed one for a concert in the Spanish Synagogue with a program including classical items along with Leonard Cohen’s Hallelujah and Queen’s Bohemian Rhapsody. That was on tonight at 7:00 pm so we bought tickets.

Crossing the bridge on the way back took 30 minutes or more because we were fascinated by a street artist sketching a portrait of a young woman. He was very good and it was intriguing to watch how he began with the eyes and worked out from there to produce a very good detailed likeness.

By then it was approaching 5:30 pm so the best strategy seemed to be to find the concert venue and look for a nearby restaurant. There was one just across the street from the synagogue. Majella had potato soup served in hollowed out loaf of bread accompanied by cider. I had a pork cutlet with salad, chips and a dark beer.

The concert in the Spanish Synagogue was well attended by an appreciative audience. Neither of us had been in a synagogue before so we have no idea if this was typical but it is an amazing building. The interior is lavishly decorated in a variety of patterns that cover walls and ceiling. The performers were 3 violinists, a cellist and bass player who were supplemented by a trumpeter and a singer on some items. Majella checked later and confirmed that all the items on the program had a Jewish connection through the composers. It lasted just more than an hour and for encore they played and sang Moon River, one of Majella’s favourites.

Our final adventure for the night was getting back to our hotel. We had taken the number 9 tram to town but searches on Maps, Google Maps and Rome2Rio confirmed that the 207 bus involved far less walking. I don’t mind walking but I’m not fond of doing it in strange cities by night and Majella had already done her quota for the day. We set off following directions from Maps, found the bus stop, waited 15 minutes for the next 207, managed to get out at the right stop and walked the final couple of blocks to the hotel. Fortunately it was where we left it or where the apps said it should be so we are tucked up safe for the night.